I reached over the Suburban’s front seat, rummaging through our sweatshirts in the back, my butt in the air. My husband rolled the SUV to an incomplete stop at the end of our quarter-mile long driveway, ready to turn onto Russell Road and make the two-hour drive to Cape Elizabeth for our sons’ high school state track meet.

“Darn, I forgot my umbrella,” I urged.

The boys left ahead of us, riding the bus with the team. By now it was almost 8 o’clock and if we didn’t hustle, we would be late for the first event.

“You’ll be okay without it,” my husband muttered.

I looked out the window at the powder blue June sky. “They’re predicting scattered thunderstorms later today. It will be a long day if we are chilled and wet.” I re-folded the sweatshirts.

He sighed and pulled a U-turn as I unrolled my passenger window. As we headed back towards the house, I didn’t realize that a forgotten umbrella would end up teaching me that a few seconds can change everything.

Once back on the road, I admired the new life of early June in Maine. Slats of slanted sunrays flashed faster on my face as we picked up speed. I inhaled the fragrance of fresh grass mingled with the morning’s heavy dew. The land, thick with pine and maples, opened to farmhouses and fields stitched with pale yellow and purple lupine.

A good day, I thought.

Most people resist delays and schedule changes like a contagious disease. We stress over misplaced keys, dawdling kids, and dead car batteries. We fidget in traffic, grocery store lines, and doctors’ offices, checking the time on our cell phones like we only have a few more minutes to live. We react to slow drivers as if we’re competing in a race, nosing closer so we can pass—to win what?

About four miles from home, I noticed the faint smell of smoke. A swirl of smoke rose up ahead on the horizon.

“Farmer Lyman must be burning brush,” I supposed.

“Or maybe he’s burning his fields,” my husband assumed.

Burning fields didn’t alarm us. Several of our farmer neighbors performed prescribed burns in the spring for brush and weed control. Years ago, I remember seeing blueberry barrens in eastern Maine covered in a blanket of flames, leaving a layer of black death behind. Someone told me blueberry farmers burn their fields to kill insects and control fungus, thus increasing their crop yield.

“Yes, his fields always look thick and green,” I recalled. I reached for my travel coffee mug in the center console.

At the bottom of one hill on Ward Hill Road, the charred smell drifted into the vehicle, burning my nostrils. I put my mug down and rolled up my window.

I wondered if he had lost control of the fire.

Curls of black smoke spiraled in the sky.

I said as much to myself as to my husband, “Usually the field fires fill the whole sky with smoke…”

The smoke’s source confronted us at the crest of the hill–a small hatchback sat askew on the road’s shoulder ahead of us, consumed in flames.

I jumped out of our Suburban before it came to a full stop and looked closer. “A man is burning in there!”

The driver’s door was crumpled in, his window opened halfway. Maybe he could crawl though the window? We yelled to get his attention. He didn’t move. Was he dead?

Cries clutched me from the other side of the road, their source from a teenage boy pinned in his pickup truck.

We stood between the sobs and the sickening smoke spiral.

The swirling smoke gained its strength from the hatchback. I heard a puff, then red flames burst forward.

My husband bolted toward the flames.

“Wait! You can’t! What if the car explodes?” My emergency nursing experience taught me to ensure scene safety before approaching.

He ran some distance down the country road. I rushed back to our SUV and reached for the mobile phone that was mounted on the front seat floor hump.

I hurried to the boy after making the call. A trail of gasoline leaked from the truck, leaving a wet trail on the pavement.

By now, the stench told me the man had sustained significant burns. It was the kind of smell one never forgets, a deathly odor with a charcoal-like undertone laced with a coppery, sulfurous stink. I knew burned hair can produce the charcoal smell and the coppery, metallic reek comes from burning blood. The mix of burning flesh, gasoline and rubber was so strong I could taste it.

The boy’s brittle shaking leaf of a voice whimpered, “I can’t move my legs.” His body trembled.

For some reason, I don’t remember the boy’s first name, only his last name. He was on his way to take his SAT’s that morning. He cried as he told me he smelled gas in his truck. I had hoped he hadn’t, because I knew it would only scare him more. I tried to talk him down while I assessed his situation. I saw no external bleeding. His petrified eyes fixed on the slumped man in the fiery car.

A woman’s voice called out in the distance. Her heavy, out-of-breath words managed to tell me that the smell of smoke caused her to look out her window. When she spotted the hatchback, she called 9-1-1.

Neither of us could free the trapped boy from the truck, so we tried to reassure him instead. I told him he’d be okay, even if I wasn’t all that sure myself. We explained how we had to try to wake up the man in the car.

We yelled and yelled at the man, getting as close as we dared, hoping he would respond and the car wouldn’t explode. He moaned only once.

My husband returned with fire extinguishers. A man who lived down the road followed him.

I remember the sweeping hisses of the fire extinguisher dousing the flames.

They tried to open the hatchback doors but couldn’t. Before I knew it, the two men were pulling the man through the window by his arms. Did they smash the window? His burned skin peeled off in their hands, causing him to thump to the ground, belly first. With his clothes burned away, I could see hollows like two big bowls where his buttocks had been. The two men bent down and dragged his raw body over the road’s gravelly shoulder. Pebbles, sand and dirt clung to his beefy and charred flesh.

His moans are another thing I’ll never forget.

Over a decade later, the Down East Boys performed a concert at my church. In between a couple of numbers, the lead singer stepped closer to the edge of the stage. He looked into the eyes of random people in the audience. “Two seconds,” he said, over our fading applause.

People in the crowd turned to one another, as if they didn’t get what was happening.

His solemn expression instilled a stillness in us. He said, “I had a 41-year-old friend who was involved in a fatal car crash. Two seconds could have changed everything.”

I noticed the faint hum of the sound system.

I’ll never know whether the umbrella kept me out of that accident.

What I do believe is that most of us live lives running at a frenzied pace, where we miss connections, make mistakes and experience close calls or tragedies. We chase our tails and fail to see the significance of our experiences. Many people live with the dissatisfaction of frenetic life. Thoreau said, “The mass of men live lives of quiet desperation.” I feel a sense of sadness and loss just reading those words. I don’t want to live like this.

As I processed all of this, I discovered a deeper meaning–one of intention, slowing down and accepting delays while maintaining peace of mind. Instead of living in anticipation of the next moment, I try to find life in life situations. Click To Tweet

The EMT’s arrived and tended to the victims. We eventually went on to catch what we could of the track meet.

I never found out what happened to the burned man after he was transported to a Boston hospital. I heard the boy’s fractured leg left him with a permanent limp.

Sometimes when I pick up my umbrella before I head out the door, I count one one-thousand, two one-thousand, feel my heart beat slow and say a little prayer before heading out the door–and take nothing for granted.

Photo by TonG FotoArt via Flickr through Creative Commons

2 Comments Leave a Comment
Close CallsDelaysFeaturedLifeTake Nothing For Granted

How to Pray When You Need to Know the Truth 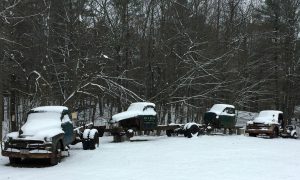 A Trail of Ruins and Tending Moments 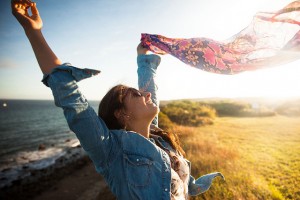 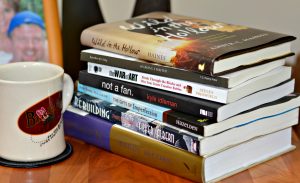 Unshelving My Purpose After Years of Neglect