Mom sat across the table, picking at her chef’s salad. “Will you shave my head when my hair starts falling out?” she asked. I felt as though someone had just shocked me, feeling the jolt and the breath simultaneously.

We just got the diagnosis. She didn’t look sick. She didn’t feel sick. This malignant intruder, breast cancer, assaulted her body. It threatened her identity. It punctuated her life. Even as we spoke, it was at work. I tried to ignore the unfurling pit in my stomach.

How fast things change. We skipped along as if we had all the time in the world: she with her quilting, baking, and volunteering; and me with my work as an oncology nurse, church member and writer.

I wondered how she would deal with the loss of control. Chemotherapy treatment exhausts people. My mom didn’t have time for this. She always expected a lot from herself. She entered college full-time with three children under the age of ten, completing the nursing program with highest honors. Now I questioned whether she could attain high honors in this new curriculum: Life without Breasts 101, Principles of Fatigue 212, and Penciled-in-Eyebrows 201.

While at my home one evening, Mom asked me to feel her lump. A rush of heat flooded to my face. With trepidation, I extended my hand. A palette of reddish-purple and green bloomed over her breast—evidence of the two biopsies. The lump was hard and large, her nipple inverted. I tried to conceal my shock. As Mom carried the lump in her breast, we carried Mom in our hearts. Her cancer was a family affair.

Worries invaded my thoughts as I drove to work: Where are we going? Will she live, or will this take her? At night, when darkness expands fears the cancer felt bigger, ravaging my sleep. The cancer feels bigger in the vast darkness of the night. Is she scared?

Days blurred together like the spinning blades on the ceiling fan I stared at during long, sleepless nights. She underwent surgery for venous access port implantation. Echocardiograms tested her heart function. We consulted with oncology specialists. Nurses conducted chemotherapy teaching. Prescriptions needed filling. Questions needed answering. Anxiety-filled nights and appointment-filled days became the norm. Even though there was a plan, it sometimes felt like we were going in circles and we couldn’t see the end in sight. 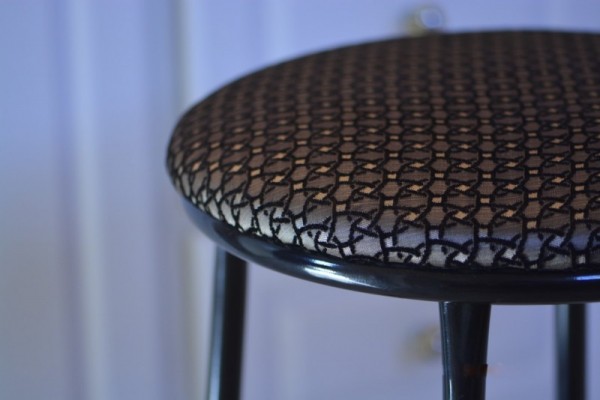 Five days passed since her first treatment. We talked several times a day. She told me how terrified she was when she felt the lump. With a sharp pang, I realized how much I love her. The shearing day arrived. She clambered onto the stool in front of her bathroom mirror. From behind her, I positioned the scissors in my right hand. I took a deep breath that did not begin to fill me.

I started to babble about my childhood—if only for the distraction. “Remember Susan?”

Her somber reflection gazed at me.

I picked up a lock of hair between my index and middle fingers. The shears snipped through the lock of hair; I felt as though I was violating her. I composed myself and leaned towards her, examining her face. 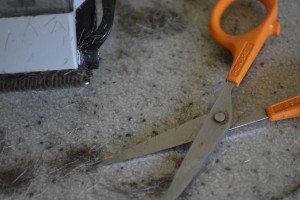 She nodded. A forced smile appeared on her face.

I rambled on, trying to divert the silence.

I hoped words in the air would act as a balm for the pain in the room. My voice trailed off. It picked up again.

“I don’t think Susan and her mother were very close.” 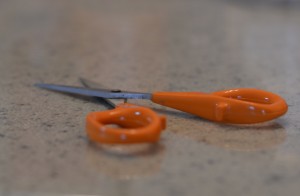 I collected another lock. The scissors sliced through the air. Another clump of hair fell to the tile floor. I kept my eyes focused on her head. It seemed too difficult to look into her eyes.

The electric trimmer shot minute shavings of hair into the air, leaving cleared strips in its path. Yet, she is still in control of her own path through her choices, attitudes, and actions. She has chosen to be a victor, rather than a victim. She inspired me, as she taught me a life lesson that I never wanted to learn this way. We were chartering new ground with no compass, only faith and love.

“Done!” I announced, as I brushed tiny hair clippings from her shoulders.

The mirror displayed a different woman—one with no make-up or hair but with courage to show her imperfections. Her control was still apparent, but carefully wrapped with acceptance and vulnerability. This was a defining moment for her as she made a choice to run towards the cancer instead of way from it. She braced herself for the lessons it has to teach her. I honored her for this.

This experience became not only a time of shearing, but also a time of cleaving to her—of embracing her and her vitality for life. I felt closer to her. Yes, I could navigate this path with her.

She climbed down from the stool. “Thank you for doing this. It’s somehow easier here at home, with someone I love. I hope it wasn’t too hard on you.”

I set the clippers down and began sweeping up the hair, as she headed to the kitchen to make us some tea.

The Art of Living

The Courage to Say “Hello”