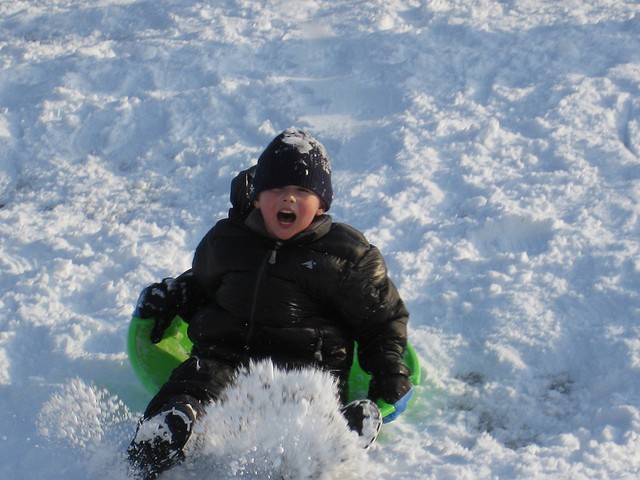 I was eleven when I trudged up the hill, pulling my five-year old brother, Dave, on the snow sled. As I took a step off track, snow swallowed my boot and left me in depths above my knees. No sooner had I regained my stance than Dave surprised me and (purposefully!) rolled off the sled, sending me forward into the snow – again. I heaved myself up and turned towards him. His cherry red cheeks painted a burst of color against the whitewashed horizon.

Other sleds zipped by, giggles trailing behind them. The trail of snot smeared on my upper lip. Before moving on, I used my jacket sleeve to wipe it away.

As my brother and I climbed the hill, we saw kids scattered around building snowmen, and others embroiled in snowball fights – back when kids played outside all day.

I triumphed when we reached the top, despite my overheated body, the snow in my boot and my clumsy mittens, weighed down heavy with clusters of miniature snowballs. We repositioned ourselves for another thrill. Dave squealed as we flew down the hill, passing a boy who had wiped out and wore a mask of snow.

“Can we go again? Pleeease?” Dave reached for the sled and managed his way to his feet.

Our bond sealed early. We shared our love of books when he was no older than three. He’d crawl up onto my bed with book in hand and ask me to read. His favorite, Kenny and His Animal Friends, was about the antics of a boy named Kenny and his sister, Lorrie, trying to find a pet. Sometimes I think Dave asked me to read to him just because he knew I’d scratch his back afterwards, if he asked.

When I entered high school, my priorities shifted as friends, dating and a job grabbed the spotlight. I made little time for my brother. Later, college life trumped everything. By now, though, Dave pursued his own interests and didn’t need his sister around to read stories. He played football, raised chickens and collected coins. I knew he was busy and didn’t need his big sister anymore, but I regret not getting to one of his football or baseball games. Weeks after my college graduation, my first husband and I married, and shortly afterwards started a family. I carried three pregnancies in three years and worked two jobs. My husband pursued his MBA. Relationships? Who had time?

Over the span of twenty years, Dave and I each trudged up our separate steep, snowy hills, lost our footing, and sometimes wiped out. Even though we found little time to enjoy an occasional ride together, he was anchored in my heart.

I’m not sure he knew this.

Thirty-four-years old and dedicated to my career, I returned to my office after a long day of meetings. As I retrieved my messages, I heard my brother’s frantic voice leave several messages, one after another. He left no details, just – call me, please. Please. Could you call me soon?

What could be wrong? Is he hurt? Is my one-year old niece sick? Maybe a car accident?

My trembling finger dialed. His unsteady voice answered the question: “She wants a divorce.” I heard the shattering of his core, as if he were a fine glass vase crashing to a hard tile floor. His pain leveled me.

“Do you want me to drive down?” I offered.

I dropped everything and drove to his house, two hours away.

Watching his marriage end turned out to be one of the most difficult things I ever witnessed. Not only because I hated to see him go through it, but also because I was reminded of what I missed as his sister and friend.

My regret reminded of how much I loved him. I realized I needed to be a friend to have a friend.

Five years ago, my phone rang and interrupted my Saturday afternoon flow of housekeeping energy. The temptation to let it go to voice mail crossed my mind.

My inner voice spoke up. What if it’s important?

My foot tapped the vacuum cleaner switch and I scurried to the phone.

“Sure.” I settled back into the sofa and slung my feet on the ottoman. I forgot about the housework. “What’s up?” 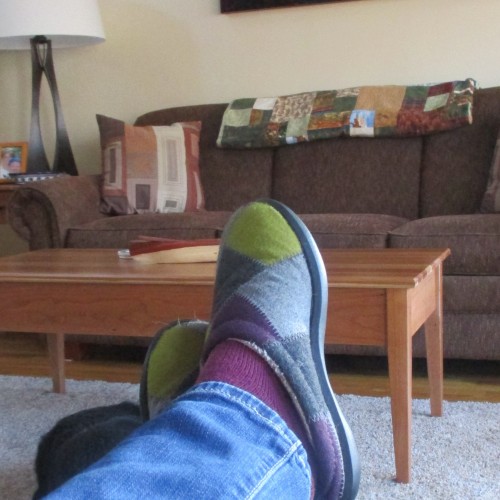 I gave him all the time he needed, and relished every minute of our conversation.

I love that he reaches out to me about issues so personal – that he knows I am there for him. He trusts me; I trust him back.

From before I can remember, we’ve been friends. Over forty years later, he is the second person I call, after my husband.

We share joys and burdens, football games and dinners. We pray for each other’s circumstances in the middle of a sleepless night. I embrace the memories we form.

If I were to ask my brother if I was always there for him, I’m pretty sure he would say no. I left him hanging during that gap in high school, college, and my early years of marriage. Even though I let him down at times, he loves me anyway. He forgave me.

As I sit at my kitchen table editing this story at 7:46 this morning, my cell phone alerts me of a new text message. Who would be texting me this early? I reach for my phone.

I read, “I love you!” It’s from my oldest friend, my brother.

The Courage to Say “Hello”

A Variation on Vows